Imagine a human on Alpha Centauri such that physics dictates that you can never physically be in the same time or space as this human. Now add the twist, that you have a magical instant messenger or Skype connection with that human. Would you consider having a (not necessarily monogamous) relationship with that person? That is the "Alpha Centauri relationship" thought experiment - would you consider having an entirely online having boyfriend or girlfriend? Some would say that despite the lack of physical connection, a meaningful psychological one could still be had, and that Alpha Centauri relationship could be part of a larger mosiac of relationships which could together be completely fufilling, if we do not require partner exclusivity. Others say that you could never know a person well enough without a face to face rapport. Not delving too deeply into possible answers, let us follow a corollary that stems from the thought experiment: if you lose the ability to verify a person's humanness then you implicitly accept a relationship with what could be a sophisticated programme. 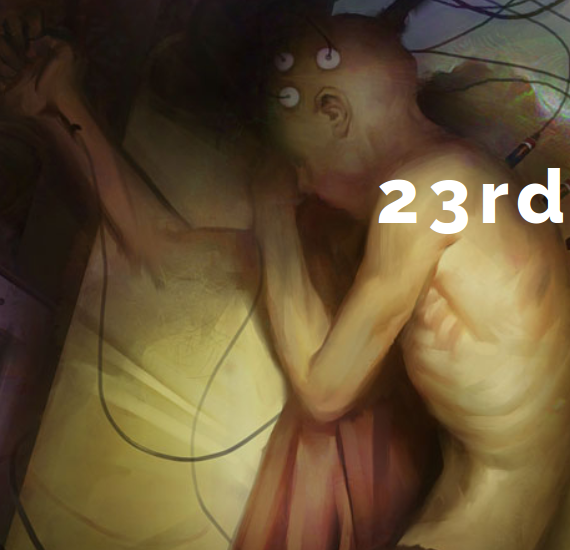 23rd Century Romance (23CR) takes online relationships one step further. If your willing to engage in algorithmic companionship, then why not code it to be the most hyperrealistic, ultrapleasurable, extrahuman companionship possible? That's the central question in 23CR: standard human-sexuality versus next generation R-sexuality (as it's called).  Each side is debated between opposing advocates, in the emo, cat-stroking Rai and his roommate Morph, the pill-popping, katana-wielding Matrix-ode. Rai searches for a more authentic human love while Morph thinks that he's already exceeded the potential love that Rai could find. Within the first chapter Morph already opines "I'm R-sexual because real women are less... what's the word? 'Womanly' than virtual women." Rai then counterstrikes "The secret to life is accepting and being comfortable with what you have and who you are!".

Without spoiling, the two young men do start to entertain each other's viewpoints, and this is where the most thought provoking parts of the tale occur. Even the adherents and appreciators of inferior real (i.e non-virtual) sex and real friends necessarily facilitate part of their relationship "in Virtual". Sometimes they vary their sex lives with virtual, but they might also use the channel to just talk about their days. They have to admit and inherently reconcile that they probably met in virtual and meet in real because they chat in virtual.

You needn't be 200 years in the future to already feel this reality. We owe our relationships, to some degree, to technology because it at minimum allows us to coordinate it. That likely remains true even for those who've deleted their facebook account but use email, and still tote a dumbphone.

Stylistically, as Rai and Morph argue at length, and over many 3D-printed meals and robo-drinks, the reader is barraged with fantasy cliche and lewd, juvenille, American-heteronormative hyperbole. You will appreciatie these flairs in proportion to how "awesome" you think lasers and unicorns are. Hartnell joyfully jumps between Nazi spy seduction and shtupping elven princesses. 23CR definitely does not pass the Bechdel Test, and if you have any feminist inclinations you might become offended by male teenager wet dream of the future descriptions. Although at one point Hartnell appears aware of this bias through Rai's inner dialogue, "Window shopping. I'm window shopping for girls. Surely that was the wrong way to think about it. He wasn't comparing 'products.'" Therefore it is not clear whether the misogyny is an intentional compulsion that is in fact a caution to the dangers we face from software reliance.

The world of 23CR is of augmented reality, gel-filled spacepods for cyberdreaming, and the choice to take "Love" pills. There is a sideplot that harkens to the Matrix where a human attempts to fight the robotic outsourcing of his job. But the revolution fizzles immediately, and the impression given by the protagonist Rai is complicit subjection to the artificial world. That becomes true for the banality of real relationships and sex at some of his junctions too. Amateur righteous rebellion against power structures is conspicuous by its absence in 23CR. That is also true of Hartnell's first offering in independent book publishing.