The Cyberwizard Institute  (CWI) was a free programming school based out of Sudo Room, running for the month of January 2015. The proclamation that I saw on their website before I volunteered to teach there was: 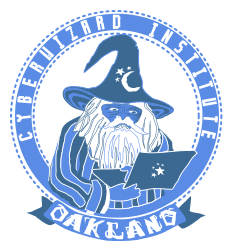 The idea is to be an anti-bootcamp. Anyone can participate. It's free. We're going to try hard to have lecture notes, assignments, and lecture livestreams up online. It will be primarily self-directed, but with guidance from higher level wizards.

As a founding member of sudoroom since 2011, but suffering from a recent malaise in my hacktivism, this was the perfect project to reinvigorate my involvement. What most appealed to me was the idea of an anti-bootcamp, because I've wanted to make clear to world the distinction I care about between start-up culture and technology. I wanted to do something metaphorically akin to hijacking the stereo system at a $4-coffee-wifi-shack and making a public service announcement that the computers are not just fancy TVs, but programmable instruments of self-empowerment, which, in addition, can be used for non-commercial purposes.

Without any formal advertising, each sudoer leading CWI was pleasantly surprised when 27 wizardlings showed up on the first day (14 women and 13 men from my count).  When I remarked this to CWI's originator @marinakukso, she responded that "when you offer a free programming class, with no experience required - people want that".

I recall some apprehension when we introduced ourselves, and there was the occasional naïve posturing  of people who claimed themselves as programmers with the phrase "I know HTML". But the need to impress quickly disappeared as we sat down to struggle with them in installing Linux on the laptops they'd brought.

The next day I was nervous with anticipation to arrive at an empty room after all we had shown fresh minds was that computer programming was about inexplicable Ubuntu hurdles. Still, with only a slightly leaky attendance most wizards did come back for more. And we went right on with teaching them bash.

We continued to meet for 5 hours daily with lectures and hackerspace-esque hands-on floating help from higher level wizards, which we dubbed "social code". Our rhythm was found quickly, and only half way through the month CWI was feeling so magical, it received coverage in the East Bay Express:

"Many coding bootcamps in the Bay Area charge tens of thousands of dollars in fees, which can be seen as restricting access to what has become essential for finding a job in technology, let alone moving up in Silicon Valley's so-called "meritocracy." Kukso explained that Cyber Wizard Institute's mission is very much aligned with that of Sudo Room, which is to give everyday folks the opportunity to understand and create the technology in their lives. "For a lot people who consider themselves nontechnical," Kukso said, "a lot things relating to technology or coding seem mystical or secret, our perspective is ... everyone can learn these types of things.'

Yet towards the end, I started to question the effectiveness and importance of CWI. From the beginning as facilitators we quipped that "anti-bootcamp" reallly meant "bootcamp". And the calendar began by reflecting that.

Which is exactly the way that substack, Oakland's pre-eminent "unix philosopher," would have it. Yet, that was before the collaborative aspects took over and I began to try and think about how I would teach a less trained non-programmer version of myself what I know now. I mixed in:

Where substack was spreading his knowledge of artisinal web-buildery, I was attempting to proselytize a world of Mathematical elegance. At times I was worried this felt interfering and competitive to the wizards.

However the final projects did come to life, instigate solely from the intrinsic motivation of the new-wizards. On the last day arduino hacks and personal-itch websites really had materialized. After speaking to those who made it all the way through the month, they spoke of a brighter perspective than my own: perhaps we inadvertently succeeding at being an anti-bootcamp.

The Medium Was Always The Message

As another facilitator @Johnnyscript, at the  ending Cyberpunk Masquerade Wizard Initiation Ceremony, said we showed them what it coding is actually like - many differently opinionated hackers running around without too much top-down organization. We delivered the essence of the hackerspace more accessibly than just happening upon a room of silent geeks staring down. Our package, despite being a bit dishevelled, did form a solid curriculum, although it was not refined as something that you might pay $17,000 for. Yet it also was not an altar for silicon-valley start-up-ism.

Taken together, we find a point that I am surprised that I missed. Whereas  programming bootcamps are normally Cathedrals, as Eric Raymond might put it, we built a Bazaar.

"Will there be another Cyberwizard Institute?" many are asking. Likely, but it is as-yet unplanned because volunteer work is tiring. If you have the intitiative or want to hear about an inititiative, join our discussion tracker on github.