Board Games do not attract me by default. The closest I have come to enjoying board games is playing Risk, single player on my phone, and reading a lot about Nomic. But when Alfred Twu speaks, I listen, so if when announced his own fresh take on board gaming my ears piqued and my credit card edged ever so slightly out of my pocket. High Speed Rail: The Board Game emerged from High Speed Rail: The Map, of Guardian Fame. Neither the map or game, have rooted in any material claim to reality, but most things that inflame your imagination don't.

The $15 printed on overhead transparency version arrived at my house a few days ago (versions go up to $100 with glass pieces). And last night 6 of us maxed-out the player count and sat down to squabble. 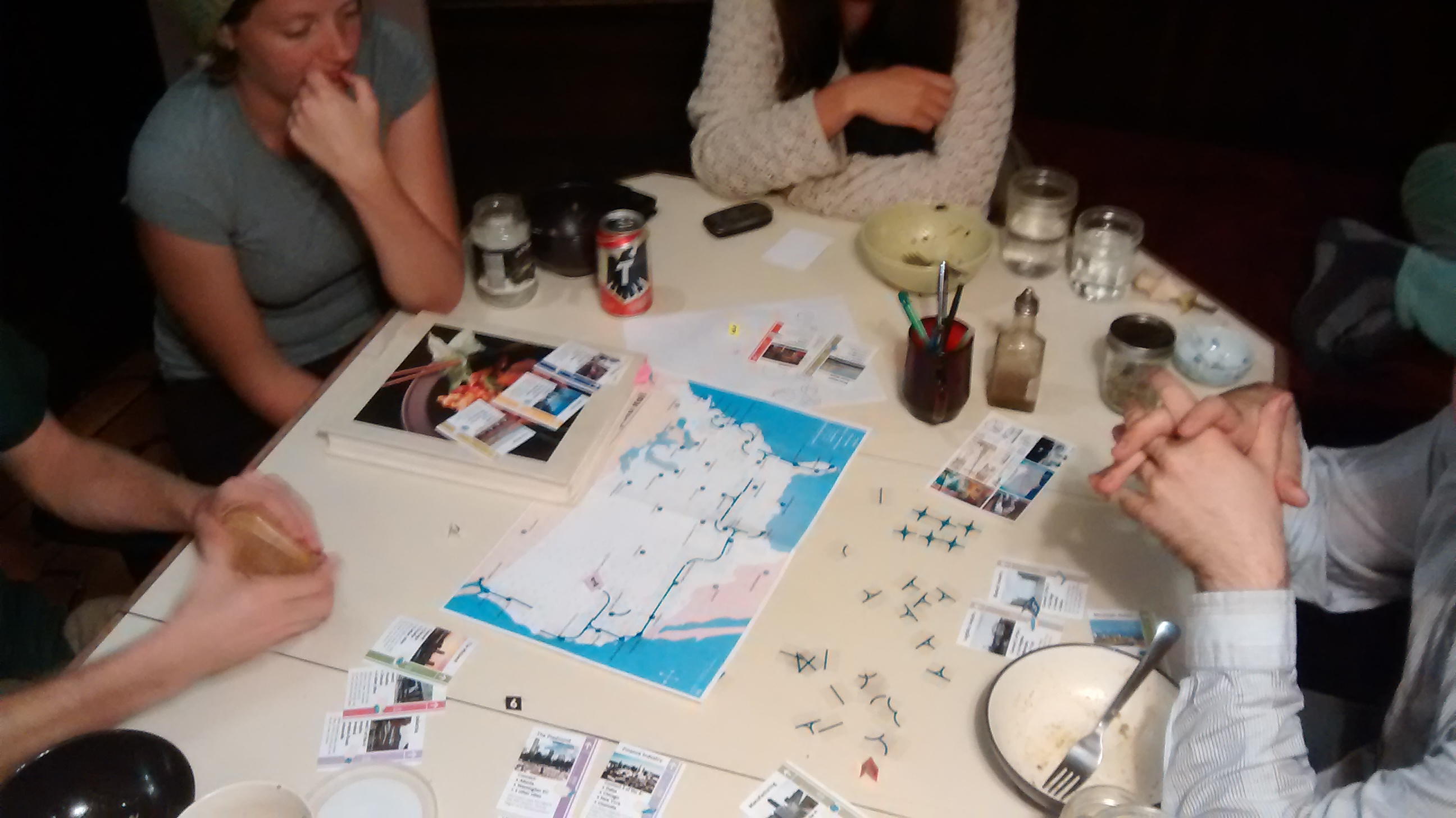 Except, there was rather little squabbling, and that completely changed my mind about what board games can be. The key thing to know about the HSR, is that you can't move.

The situation is that you are given 3 objectives, of the type "Logistics Industry: Connect 2 of the 3 Cities - Detroit, Houston, San Diego". Then you have to place tiles to realize your rail network - except as I mentioned - you're not allowed to place tiles. Rather when it's your turn, everybody else will place a tile as a proposal, and you will select another player's proposal (or 2 proposals at a time for a 5+ player game).

This means that all your strategy comes by way of surveying other player's objectives and finding the most mutual ground with them. This is slightly complicated by the fact that only 2 of the objective cards are publicly shown, and the 3rd one is kept secret. Barring this small niggle the games is not competitive at all, you are constantly trying to find compromising ground - in some ways a very realistic,  and in others a very unrealistic version of democracy in the US.

Unlike most games, I didn't feel frustrated for having lost to unfair rules, or scheming opponents. It wasn't too long, only about 45 minutes (and it was everyone's first time playing).  To play is to softly massage an unfolding  system. The game has CC-BY-SA logos on all the pieces, and everyone is mostly cooperating. High Speed Rail is the nobly amateur, egalitarian pastime that would be played in Ecotopia.

You can can download a free print-it-yourself version here.