iSchool at Berkeley was a department I revered during my time there lurking in the backs of lecture rooms for special events and timidly knocking on Professor doors, which is why I was so honoured when they invited me to guest-speak at the infamous Friday Seminar. On August 24th 2012, in front of 20 attendees I talked about my latest passion, creating bidirectional links between Wikipedia and other online databases by *link reciprocation. * Vivian Petras gave a suitable opening talk about Europeana language problems form a half-technical perspective, which made a suitable segue into my talk, "Data Archipelago." 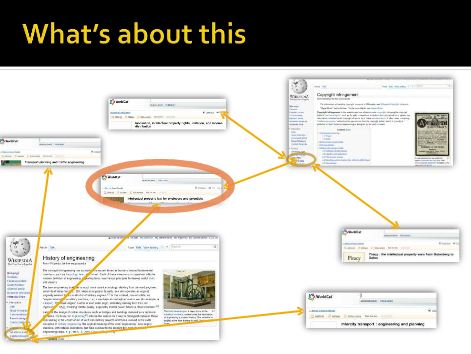 Unknowing on how much to delve into details of still-in-review VIAFbot, I attempted to strike a middle ground by describing how VIAFbot would work, and subsequently what that could mean for the future of connecting what I call Data Islands. The method that I propose in this talk is the link reciprocation technique, whereby an algorithm follows links going into Wikipedia then reflects and reciprocates those links back out to the initiating site. This imitates a bidirectional linking structure, which the ultimate loser in a hot debate in the creation of the web circa 1990.  A stand-out, Wikipedia always kept bidirectional linking in its internal structure, but could not by itself  implement this type of link between the exterior Data Islands.  Given VIAFbot's hacked-way of making these cross-site bidirectional links we could create new ways to determine not only our interests, but topics in the intersection of our interests of which we were previously unaware (slides 40-46). As an analogy, I aimed to show that there were practical ways to create informational seaplanes to island-hop what I am creating and terming the Data Archipelago.