This is Morten's Rule of Airports, it's history, and some of its benefits. The rule states:

If [the length of your layover] minus [the time it would take to comfortably get to the city centre and back] is greater than or equal to one hour, then you should exit the airport.

Or for those of you who read nerd:

During an expedition to see my friend Morten in British Colombia, in which I was struggling with travel-stress, I was struck by a story of enlightened travelling genius. Morten told of a tale where a flight of his was delayed at Charles de Gaulle Airport in Paris by several hours. It was an inconvenience because he was missing appointments for work and with friends in Denmark. He was getting stressed when he overheard a couple that were vocally calculating the time it would take to get to the city centre and back. Even with reasonable train delay buffers the journey would still leave them with 1 hour and 5 minutes in Paris. While it seemed a bit ludicrous to go for just 1 hour and 5 minutes, there wasn't much else to do, so he boarded the shuttle, and set off mostly aimlessly. In his 65 minutes, he bought a croissant and a coffee and sat and pondered. A state of relaxation and bliss came over him, he relates. It was just atmosphere soaking, but it was real - especially compared to the departure lounge. On returning to the airport with the planned buffer in tact, he wrote to all his missed appointments that he was really sorry to miss their meetings. To his friend he recounted his hour of cosmically-displaced croissant munching and a restored inner peace.

Impressed very much by this story at the time, I've decided to honour it. Therefore I have abstracted its principle and named it after its originator. You can help me to codify this rule by implementing it in your life.

I walked this talk when I last stopped over in London. Landing at 8am, and taking off again at 2pm, I counted an hour's travel in each direction and the need to be two hours early.  I was still left with 14-8-1-1-2 = 2 hours of freedom. At first I expected to do nothing besides my normal coffee and journalling  ritual. Yet, stepping out of Victoria station and on my way to hunting down a Costa's, I encountered a City Cycle Hire. My plans changed in that instant, and after the nuisance of accepting all liability for my own dangerous cycling behaviour, out clicked a 3-speed indestructible 2-wheeler. Then with a buzzing smile across my face, I intrepidly raced to Buckingham Palace, Nelson's Column, St. James Park,  and the Houses of Parliament with the goal of trying to get a fast-forward visual-effect through speed. Later I topped-up a SIM called an old friend for 13 mins 36 seconds,  and guzzled a Strongbow at 11am opening time. It was a brilliant interlude, providing adventure, exercise, and chemical euphoria in a condensed movie-long wander. Far better than purposelessly zooming in and out on the display cameras at the unbranded electronics shop (which I still did for 20 minutes anyway, but 60). I hope you are as convinced as I was to get out and enjoy the only-marginally but still better activities that are available in the open-air tourist traps.

In fact I had great joy at playing the fool as I asked a someone to take a picture of my luggaged self, and received this appalling shot. 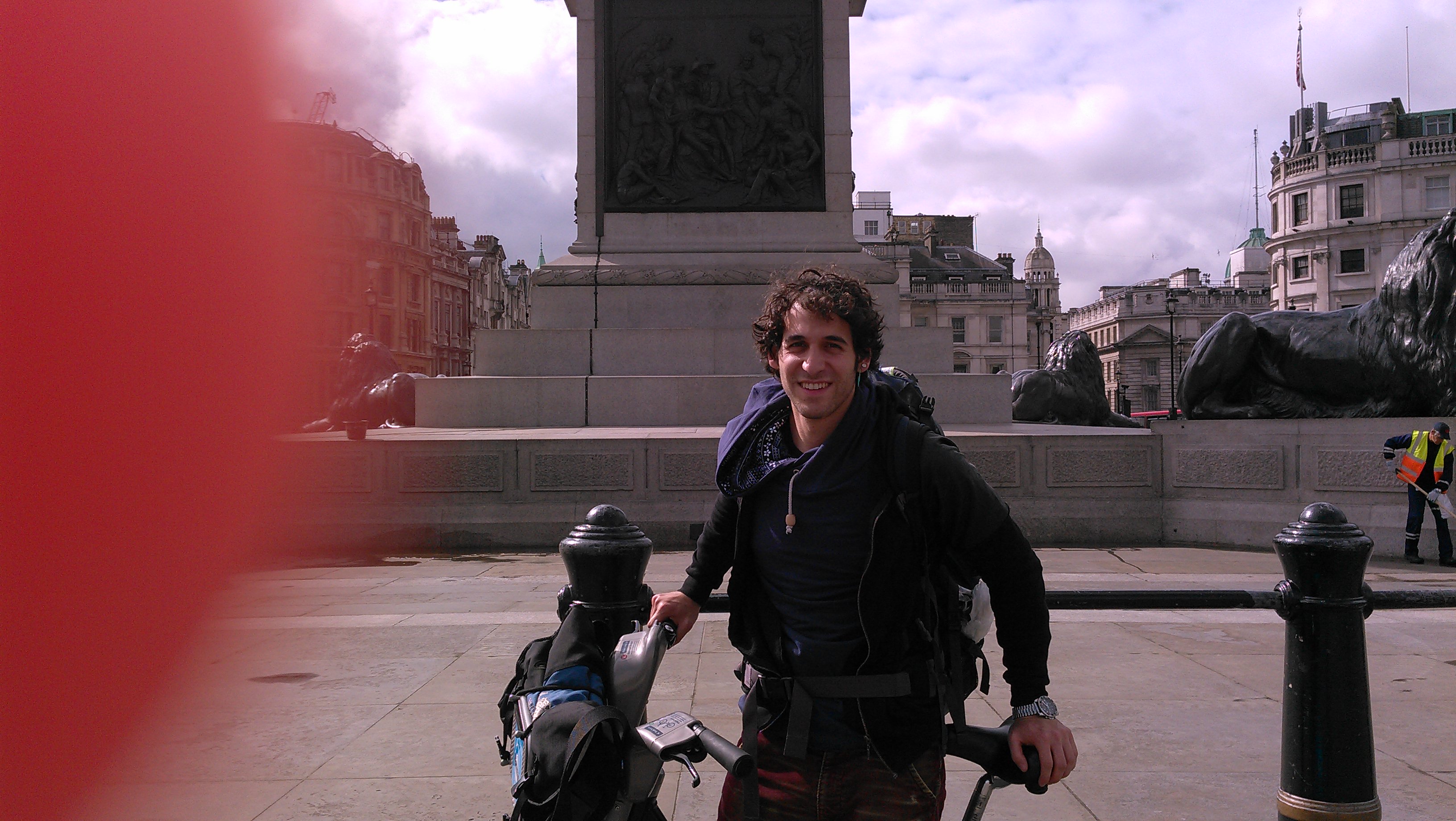 It did however this piece of poetry:

The picture was cropped
by the tourist-photographer.
The subject was photographed
by Nelson's trunk.