Profiles of Inspiring Wikimedians I Met at Wikiconference USA 2014

Wikiconference USA 2014, in New York, just finished, and more than usual this conference instilled in me a lot of motivating social energy. Yes, I did present there, twice, on "Answering Big Questions With Wikidata", and "Signalling Open Access References," but more so than usual I enjoyed attending other presentations. On reflecting why that was, I came to realize it was the earnest authentic effort of other Wikimedians, that shone so brightly. These are some of the more inspiring characters from the conference, but by no means a complete list.

Sumana gave the opening keynote wherein she talked about implicit versus explicit exclusion. To introduce the subject she told of her positive experience at Hacker School which does actively exclude some people (there's an application process), but as a result makes a more intentionally inviting space. That is because only inviting, inclusive individuals are selected for Hacker School. As she related this to Wikipedia, the shortcomings of our emphasis on liberty highlighted, perhaps it doesn't ensure a safe learning space. A key quote that summed this was "in the Wikimedia community, since we don't exclude anyone explicitly, we exclude others implicitly [sic]." Strong free speech defence is not muting some overbearing voices. A full transcript of the talk is available.

I particularly became aware of Hacker School's "no well-actually's" rule that Sumana presented. Many times during the conference, when someone was doing something in Python that had a technical side-note I wanted to slot into the conversation, but being newly aware of how this is disruptive, I simply allowed the real learning to continue. Sumana very much practiced this too, as I witnessed when someone came up to her to her to talk of her discomfort about someone who was wearing Google Glass at the conference. She without pause jumped to help, offering to go with the privacy advocate to find a conference organizer without any judgement on the camera-controversy itself.

Sumana also gave an impromptu Gender Diversity training, which came from Ada initiative. Actually this was offered twice and I attended both sessions (and it was my third time since I'd watched it online). Sumana's rapid-fire style resonates with my personality and preferred learning style very well.  This allows me to really synch-up with the lesson and download the content with high-mental-bandwidth. In general Sumana is an over-clocked, but liquid-cooled processor, which is brilliant if you are too, and have fibre-optic connection.

In Zürich we were going to work on a python project together because we were both talking about wanting to pair-program python on twitter. Then we realized we didn't want to work on the same project. I was really impressed with her straightforward, unpretentious communication when she said "It doesn't seem like want to work on the same project - so perhaps another time." The combination of directness and openness is liberating. Often we see one without the other, but having both is a fantastic combination.

And she is the mentor of:

Frances gave a walkthrough and workshop on the MediaWiki API. I actually interact with the API a lot, but never directly only through pywikibot, so I was much enlightened by this lesson. In fact Frances explained with great care and deliberateness, from step zero, what is an API, all the way to the specifics of the MediaWiki API and how to use a client library. Frances' teaching style is methodical. The pace is never frantic, taking time to get every word right, never needing to allow herself extra time with "er" or "um". Learning from Frances is like having an immaculate syllogism patiently unfurl in front of you.

She also did the brave thing of giving a live demo of mwclient, starting from pip installation. Which was great to learn because I am only familiar with its not-quite-competitor pywikibot. So she both didn't assume any technical knowledge, but didn't leave experienced programmers bored, which is a hard balance to strike. This is her blog about her presentation including links to her slides.

Frances also taught the same Gender Diversity Training aimed at cis-men, which I attended. It was in this reprise that I most caught the proverbial advice -  "to follow your discomfort."

Finally I'd like to credit her Chemistry knowledge and quick wit. In my previous blog post about sex ratios, I mentioned I'd found an occurrence of "sodium" for a sex. Frances quickly Sherlock Holmes'd that this was likely because someone had tried to enter not applicable - "na", and probably received the auto-suggest chemical element. 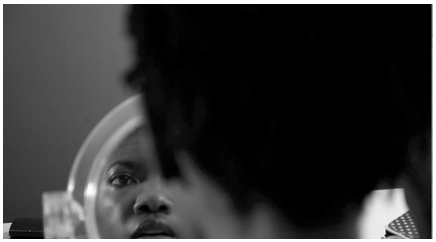 At the conference Joelle gave a lightning talk that I enjoyed about her involvement in improving the Mozilla wiki, at which she has an internship. One day, she said, she became curious about the wiki's usage statistics, but could not find anything more than minimal information that was contained in maintenance reports. So she has started building some scripts to analyse and visualize the Mozilla wiki's usage.

Later in her lightning talk she also discussed her own autodidactic learning techniques, where she told of being a big recorded-conference-video watcher. Joelle has a particular penchant for linux.com, she shared. Therefore her being part of Gnome's Outreach Program for Women should come as no surprise. As part of her Gnome involvement, Joelle fuzzes 0MQ, a stress-test debugging techinque as she patiently explained to me.

Over a beer in Brooklyn later on, she was coaxed to shed some immodesty and recap the tech-art piece that she'd made. It is a interactive installation where one wears headphones listening to a monologue of a woman talking about her inner thoughts and as you approach a video screen a proximity sensor tracks you. The closer you get to the screen, the video changes to reveal increasingly more intimate footage. 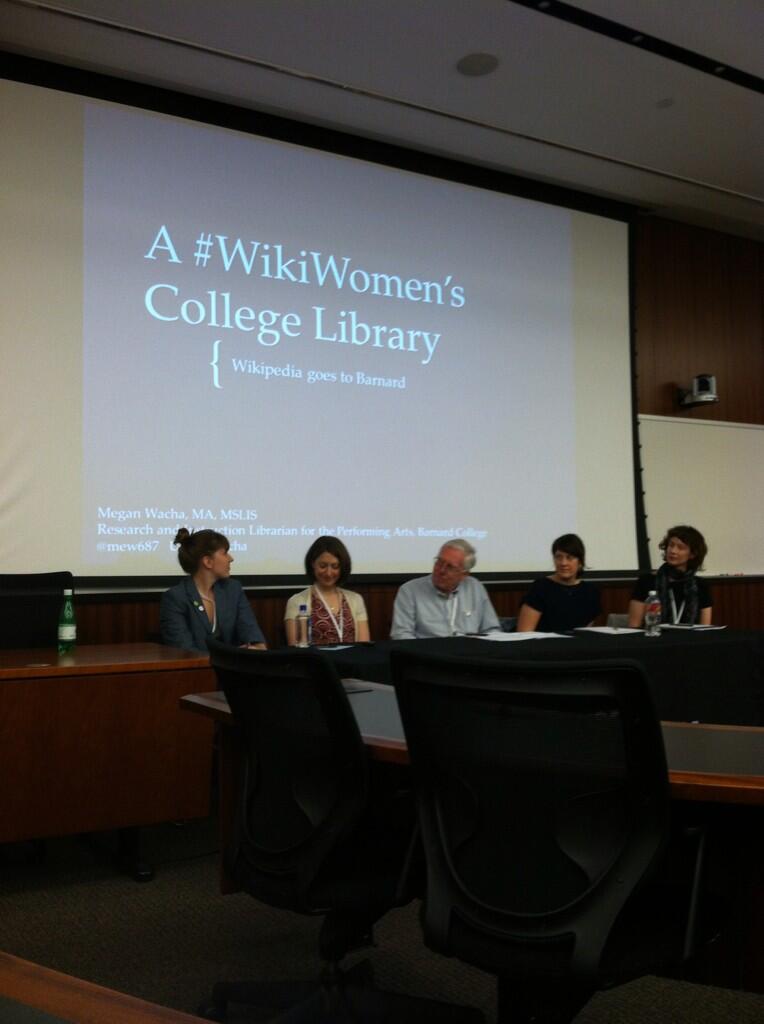 Megan on the Left. Attribution[/caption]

Megan is the Research and Instruction Librarian for the Performing Arts at Barnard College of Columbia University. Her presentation at the conference was about the multiplicities of roles for Librarians in Wikipedia. Regretfully because of scheduling I couldn't attend it. She however attended mine and Wrought's Signalling Open Access talk, and amazed from the Q and A. In a debate about whether it is it overcomplicating to import Open Access articles to Wikisource, as there may be corrections or retractions published, she noticed the more general problem. This was the first time I heard someone say "I'm going to bring this up with MLA." Her reasonable position is that "we should really be citing the used-source and not the original publication." I didn't even know you could take issue with MLA.

During a lightning talk about there not being enough video in Wikipedia, a list of high profile articles without videos were cited, "Racing, Soccer, Dance." On the word dance, with a large hacker-confidence she leaned over to me and said "we're going to fix that." What an assertion,  and I believe it because of her other on-wiki work. Do you know the Ntozake Shange article? Well its existence is owed to the inclusion of particularly hard to find sources - which is her speciality.

Two last special mentions, that I didn't get enough time to know well, but want to hat-tip.

Is currently working at the Metropolitan Library Council, as Wikipedian in residence.
Endearingly to me, she promotes the Wikipedia Authority Control project, which is easy to enjoy since it aggrandizes the work with VIAFbot. But this is also part of a holistic effort of hers to be a sort of techno-evangelist for a lot of wiki-library projects, and anyone that is in that space knows its presence is hotting up.

Has been involved in SFC for a long time, Wrought told me that he remembers meeting her in 2008 in Berkeley. Apparently since then she has not let up. She was the main conference organizer, and fire-putter-outer. When I was accidentally double-booked (to speak in two places at once) she coolly helped make sane the logistics. Thank you for making the conference happen.