I didn't like the Dyson Airblade at first. Its slick futuristic form with neon yellow striping gives the visual indication that it will instantly dry your hands, which it doesn't. It takes 12 seconds. Still, I claim this represents a revolution. The watch-a-microwave-tick-down waiting time is a small price to pay for leaving the tiled room with hands truly free of water, rather than the less-wet state my whole life prior to this invention taught me was normal. 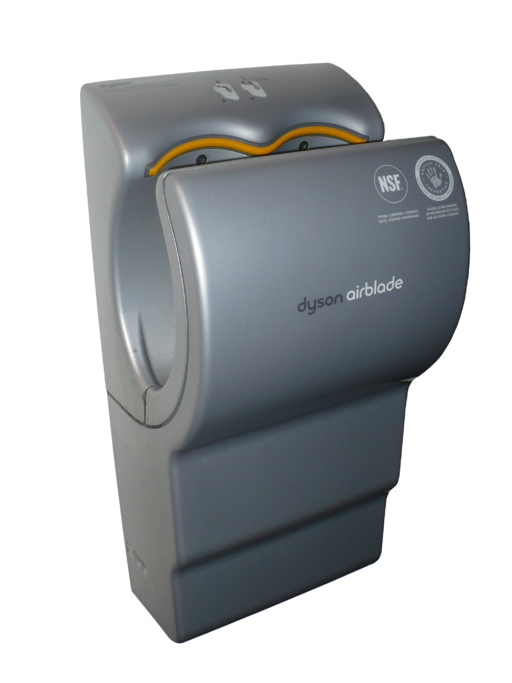 To understand why the Airblade represents such a leap forward in hand-drying technology, we have to understand the past that Dyson was trying to escape. My earliest adventures in cognizant demoisturising were at my primary school, as a beanling that still hadn't mastered the use of a fly. At that time the state of the art was the rotating towel. This was a wall-mounted box from which hung a loop of cloth towel. You would use the towel loop as normal, and when it became too wet to be effective at all, you could pull on, and advance the towel to an unused portion.

This is when I first came to suspect "drying your hands" was a bit of a misnomer. The towels in use with this looper were of such low quality that they bordered on plastic. This meant that absorption was low, and the inflexibility of the material could not easily journey through the intra-finger crevices. Thus, being commanded to dry my hands by my teachers was a tough lesson in delivering an impossibility.

But because we were living in those dark-(read: wet)-ages, we couldn't perceive the problem, let alone the solution. I suppose the impetus to move off the technology was spurred by germophobic objections. Perhaps I am only using the term germophobes because I did grow up as a hardened looped-rag wiper. For in the Ignaz Semmelweis vein of antiseptic precaution - who reduced mortality rates for delivering mothers from 18% to 2% - we had yet to see the linkage between disease and this a bacteria conveyor belt. Yet, in retrospect I have have nostalgic pining for this conglomeration of metal and linen, for its speed and environmental sustainability, two measures it scores well on.

The Ouroboric fabric was much better than it's successor - hot blown air. HBA fails miserably because of the temporal consideration. Only when I have wanted to see if, given enough time would the technique eventually desiccate my hand, have I not given up the loud nuisance. Throughout my adolescent years, my hygiene routine in restaurants, petrol and train stations, consisted of washing, and then slapping those large buttons with my elbow. This activated a machine that drew electricity from the grid and deafened me, but didn't dry for shit. I left a trail of drips on my way to the door as I wiped my hands on my trousers.

Testament to its failure, blown air is disappearing from the consumer landscape. A few last ditch efforts have been made to modernize the heated jet streams with the bolting-on of proximity sensors, but I think public can tell that this is just flash without substance. Hot air is just that.

Of course, a third option has tried to merge the relative usefulness of elliptic towels, with a de-communalized nature: paper towels. Paper towels work, there is no doubt, but their down fall is the degree of ignorance with which they force you live. I worked in a dot-com office park on a bland 5th floor, whose corporate toilets' only pizazz were the luxurious 2-ply paper towels. The waste generated by paper towels is enormous mostly because of unused proportion of towel. If you look in a bin where paper towels are tossed off you will see that for any given towel less than 50% of it is actually damp.

During my time at that office I attempted to cultivate a technique which would maximize per-sheet usage. With enough care I found that 1 can be sufficient, there is a lot of fibre at your disposal that simply takes patience to utilize. While this might seem partly a way forward, the real issues here are cultural and educational. I received the same level of frustration that I might with someone sitting on a public transport blocking an open seat, when I would I stand at the mirror carefully detailing my hands and some ignorant fellow would waltz in and take 3 massive, unconscious pulls at the pulped-goods.

The marketers of paper towel, trying to childishly to save themselves from obsolescence have thrown in the red-herring of compostability. Naturally this just incentivizes waste all the more. The cleverest approach I've noticed to mitigating the ketchup-packets at McD's mindset was a sticker on a paper towel dispenser in hippie-haven Shasta, California. It said "These come from trees. This sticker saves 1,000 towels per year." The appeal to fulfil this prophecy was strong, and I hope many take up the cause.  Still we have only a small bandage on our aquatic crisis.

Lateral thinking approaches to navigate around the drying dilemma involve not getting wet in the first place. Another wasteful, non-renewable way, is the anti-bacterial gel method. We encounter this in the Western world when running water is not available, and for me personally is highly associated with Burning Man. I don't dislike this technique because you do save on water and drying. But we have been warned about the future danger of antibiotic-resistant super germs if our hubris in this technique grows too large. I can't live with that kind of responsibility on my hands.

Alcogel's no-dry logic can be twisted even further. A friend of mine Sergey once tweeted that he felt guilty for washing his hands, if he didn't dirty them while in the bathroom. That makes sense, perhaps the most environmental way to dry your hands is to reduce the necessity of washing them at all. With the introduction of the proximity sensor to porcelain wares - in contrast to proximity sensing air-blowers - a washless sojourn can be imagined. The automatic urinal has came around within my lifetime, and I've welcomed it's ubiquity.

The potential downfall of this philosophy is that it is difficult to monitor exactly how unused our phalanges are after a romp in the water closet. It's an unnecessary tight-rope to walk. During the writing of this essay, I was conducting a Sergey-inspired relief break when upon exit, I was confronted on my bypass of the sink and its subsequent chain reaction of interventions. This seemed like the perfect time to explain a marvellous new worldview to a interested audience. But the conversation turned heated when we failed to connect on what was metaphysically important in that public/private realm.

Luckily we don't need to argue any more: all these trials have culminated into an end-point, the Dyson Airblade is it.
The device floors me with its innovation: hygienic, efficacious, and environmental. It's usage requires no touching, so there is no viral by-proxy human contact. The sheer force of the air, because of it's shape, does actually work as if a squeegee. Let us pause on this point, Dyson has made what amounts to hologrammed rubber, and this is superior as a matter of mechanical principle. Despite that it uses electricity to operate, it has no by products like paper, and so allows for relatively clear conscience in patronage, especially in conjunction with renewable energy.

The Dysonator does actually have it's weak point: education on how to use it is almost a government secret. You are mostly encountering it in airports where acquiring skills isn't top of mind. The instructions, if you notice them, are imprinted on its frame. They are a 2 point list. (1) To manoeuvre your hands into position to start, and (2) to shift them in the vertical plane. DONE. For the on-demand smartphone generation, though, these 2 steps are possibly one to many. (Remember the iMac advert with no step three? We're a generation past that.) The second, which requires 12 seconds of slow moving tai-chi, was a paradigm shift for my twitter addled brain, which I'm thankful for miraculously discovering.  Now meditation is unlocking an arid world of pleasure for myself and my extremities.