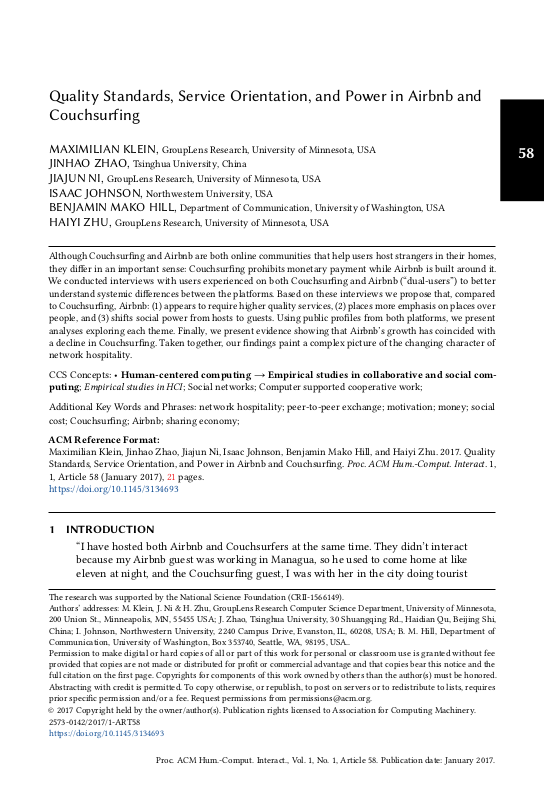 "I was on holiday, and I saw the same people advertising their room on Couchsurfing and Airbnb." Two years ago my friend and co-author Benjamin Mako Hill pitched to me investigating the phenomenon of seeing the same exact accommodation available on both the paid site Airbnb, and the totally free site Couchsurfing. My advisor Haiyi Zhu turned to me and asked "what do you think?" I'm not sure how long I took to respond, but in that moment two memories came flooding back. The first was having Couchsurfed with someone who also on occasion Airbnb'd their room. The second was the fruitless slog of  working for a moribund Airbnb clone. After I replied "yes" eager to start working in any capacity with my new collaborators, both flashbacks proved to be prescient.

The project, whose findings I promise I'll get to, rekindle my energy for Couchhosting. As Minneapolis was one of the closest major airports to Standing Rock, I ended up hosting a variety water-protectors and was able to give to the cause without leaving—but by giving—the comfort of my own home. before entering my PhD program, and had succeed on the first try. As an unaffiliated penniless hacker coming to a lab with pedigree I thought things would only get easier. The quickest explanation is that acceptance rate was catching up with me. If I reflect more deeply, this paper was methodologically ambitious.

The double-edged sword here were the mixed methods of an interview study combined with statistical analysis. Quite easily I believe that either hal On the other hand the slog was back with vengenance. This paper took 3 rejections and as many accompanying rewrites. I'd published at CSCW 2015f the qualitative or quantitative halves could have stood alone. But in Act 1 was implementing the recently learned the Grounded Theory method, and after intermission came the equally new to me mixed-effects linear regression on webscraped data. One take a way is that in mixed-methods the results is not necessarily greater than the sum of its parts, but no better than its weakest component.

In any case the perseverance and rewriting paid off, and I can now leave you with a link to the preprint , which you can also find in the upcoming CSCW 2018.

Couchsurfing and Airbnb are online communities that help users host strangers in their homes. That said, they differ in an important sense: Couchsurfing prohibits monetary payment while Airbnb is built around it. We conducted interviews with users experienced on Couchsurfing and Airbnb (``dual-users'') to better understand and unpack systemic differences between the platforms. Based on these interviews we propose that, compared to Couchsurfing, Airbnb: (1) appears to require higher quality services, (2) places more emphasis on places over people, and (3) shifts social power from hosts to guests.
Using public profiles from both platforms, we present analysis exploring each theme. Finally, we present evidence showing that Airbnb's growth has coincided with a decline in Couchsurfing. Taken together, our findings paint a complex picture of the changing character of network hospitality.