Manifest Dismantling: An Intention to Practice

All the books I have been reading recently have had extremely instructive titles. There was "How to Be Idle" by Tom Hodgkinson on the pleasures of laying about, "How to Be Bored" by Eva Hoffman, which has a slightly more historical take, and finished this week was "How to Do Nothing" by Jenny Odell, which puts the notion into conversation with art and activism. 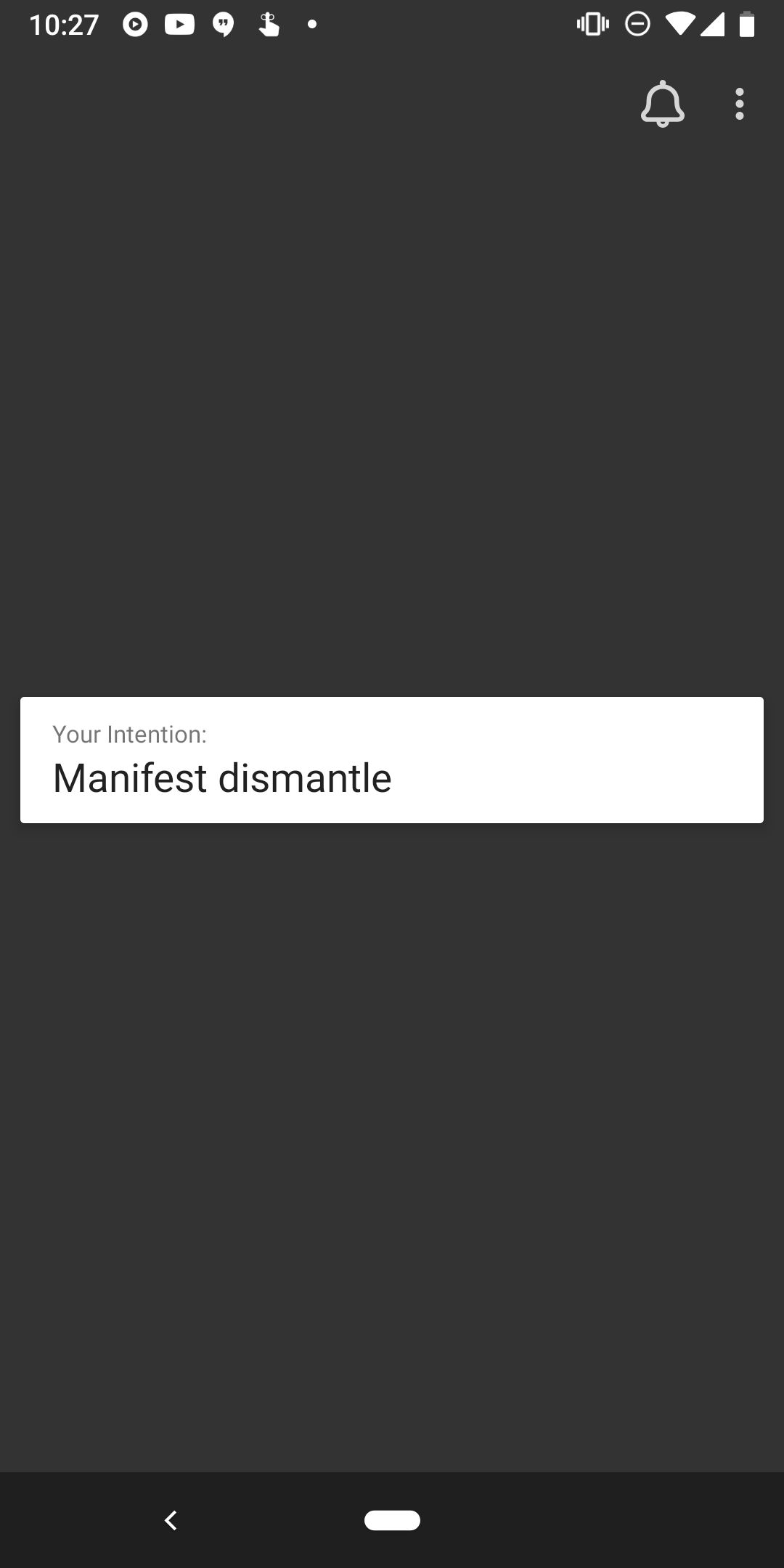 Odell's book takes on particular importance for me as it is based off an epiphany she had at the Oakland Rose Garden, a location dear to me as well. The local author, visual artist, and Stanford lecturer, questions the effects of the attention economy and logic of productivity, discussing how me might resist those forces. Her answers surprised me. She does not believe that technological interventions like app time-limits are the solution, but rather that it is our own individual responsibility to cultivate and place our attention autonomously. This free-thinking attitude makes more sense as you read on, visible in the way in which she embeds the attention conversation into the political one of acknowledging the detrimental history of white patriarchal America.

What follows is a long excerpt, approximately the first 2 pages of the conclusion of "How To Do Nothing" in which Odell introduces the concept of "Manifest Dismantling" which I found so provocative that I wanted to take it with me to chew on it further. [Bolding and insertion of Images my own].

"If you become interested in the health of the place where you are, whether that’s cultural or biological or both, I have a warning: you will see more destruction than progress."

In “The Round River: A Parable,” the conservationist Aldo Leopold writes: One of the penalties of an ecological education is that one lives alone in a world of wounds. Much of the damage inflicted on land is quite invisible to laymen. An ecologist must either harden his shell and make believe that the consequences of science are none of his business, or he must be the doctor who sees the marks of death in a community that believes itself well and does not want to be told otherwise.

Last week I went on a walking tour of downtown Oakland led by my friend Liam O’Donoghue, an activist and historian who runs the popular podcast East Bay Yesterday. The tour had been a thank-you for those who had contributed to the production of his “Long Lost Oakland” map, which includes indigenous Ohlone burial sites, extinct species, now-gone historic buildings, and an ill-advised giant gas balloon that (sort of) took off from downtown in 1909. Introducing the tour next to the Jack London Tree, Liam reflected on what it meant for newcomers to be learning Oakland history even as so many of the people and institutions who made Oakland what it was in the first place were being pushed out. In a time when monoculture threatens not only biological ecosystems, but neighborhoods, culture, and discourse, the historian, too, is in a position to see “the marks of death in a community.”

On the corner of Broadway and Thirteenth, Liam took a moment to read a statement by T. L. Simons, who created the art for the “Long Lost Oakland” map. Simons described the distinct mix of love and heartbreak he experienced while spending hundreds of hours illustrating the map by hand. The process required him to meditate on a series of obliterations: of the burial sites of the Ohlone people, of the mass transit Key System that was later replaced by highways, and of the shoreline of marshes and tidal estuaries now reshaped for the demands of the global economy. “In short,” he writes, “the story of this city’s transformations has always been the story of human and ecological devastation.” And yet his dedication came from something more than despair:

I have chosen to illustrate this map not as a horrific depiction of the catastrophes that define our common history, but as a reflection of the resilience and magic I see in the city around me. It is a reminder that no matter how bad things get, they are always changing. I want Long Lost Oakland to ground the viewer in the place where they stand and to spark the imagination of those who will struggle for a different kind of future.

Simon’s attitude—one of sadness, fascination, and above all a wish to attend to the past in the name of the future—reminds me of another backward-gazing figure. In the midst of World War II, the German Jewish philosopher Walter Benjamin wrote his famous interpretation of Paul Klee’s monoprint Angelus Novus, in which a somewhat abstract angel appears in the middle of a picture plane surrounded by dark smudges. In an essay called “On the Concept of History,” Benjamin wrote:

The Angel of History must look just so. His face is turned towards the past. Where we see the appearance of a chain of events, he sees one single catastrophe, which unceasingly piles rubble on top of rubble and hurls it before his feet. He would like to pause for a moment so fair, to awaken the dead and to piece together what has been smashed. But a storm is blowing from Paradise, it has caught itself up in his wings and is so strong that the Angel can no longer close them. The storm drives him irresistibly into the future, to which his back is turned, while the rubble-heap before him grows sky-high. That which we call progress is this storm. 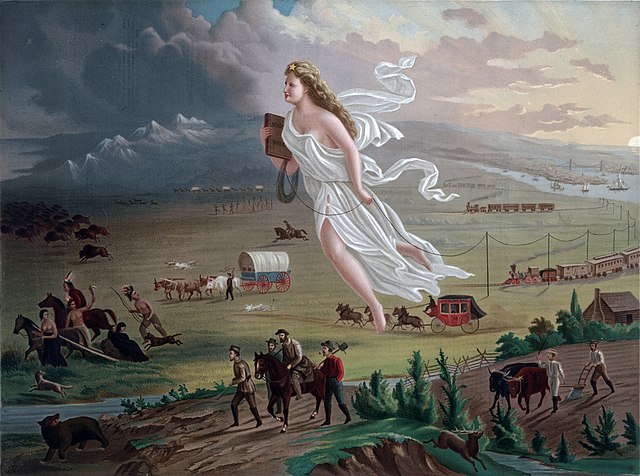 The image of an angel that wishes to forestall progress is all the more remarkable given how often progress itself is what gets deified. One example of this is from an 1872 painting called American Progress by John Gast, meant to illustrate the concept of Manifest Destiny. The painting shows an enormous blond woman in diaphanous white robes striding westward into an unruly, dark landscape, trailed by all the hallmarks of Western civilization. Cultural domination is inextricable from technological progress in this image. Reading left to right, we see fleeing Native Americans, bison, a growling bear, dark clouds, and formidable mountains; those are followed closely by a covered wagon, farmers with domesticated animals, the pony express, the overland stage, railroad lines, ships, and bridges. The progress-deity herself holds a tome simply titled School Book and is in the middle of stringing up telegraph lines, bringing connection to the West.

In a short analysis of the painting, the historian Martha A. Sandweiss writes that when she shows the image to her students, they imagine it to be some large and grandiose oil painting. In fact, she writes, it’s merely twelve and three-quarters by sixteen and three quarters inches. That’s because it was commissioned and produced as a foldout by George A. Crofutt, the publisher of a series of Western travel guides. In that sense, we can consider it an ad: buyers of the Crofutt guides stood not just to see new places but to see the unfolding of a kind of divine progress (certainly something not to be missed!).

In the preface to one of his guidebooks from a year after the painting was commissioned, I found Crofutt’s breathless description of “a country that only a few years ago was almost wholly unexplored and unknown to the white race”:

But since the completion of the Pacific Railroad, it has been occupied by over half a million of the most adventurous, active, honest and progressive white people that the world can produce—people that are building cities, towns and villages as though by magic; prospecting, discovering and developing the great treasure chambers of the continent; extending our grand system of railroads all over the country, like a vast net-work; or engaged in the cultivation of the inexhaustible soil, which is literally causing the wilderness to “blossom like the rose.”

Of course, we now know that the soil was exhaustible after all, and that “developing” actually meant quickly depleting—as in, every old-growth tree in Oakland except for Old Survivor. The phrase “as if by magic” is a chilling erasure of the waves of straight-up genocide that ravaged indigenous populations in the nineteenth century. Thinking about the Ohlone shell mounds and about how all of the extinct species on my “Long Lost Oakland” map disappeared in the nineteenth century, I can’t help but read the white-robed woman in the painting as the harbinger of the cultural and ecological destruction. While the tiny beings below her run for their lives, she wears a strange and benevolent expression aimed not at them but at something else in the distance—the imagined target of progress. It’s only with her gaze fixed on this target that she can trample on hundreds of species and thousands of years’ worth of knowledge without ever breaking her pallid smile.

This chapter enticed me from the opening quote because I too care about a land (a forest on Mount Sutro) that's being cut down. I was struck to understand that that's the typical sate of land in our society. But it's also only normal because of the anthropological manifest-destiny ideology we live under. I like how Odell points out that the trampling of this nature comes from forces that are fixated elsewhere, in this case on the future. The antidote, she claims is a presence where one can one be undistracted enough to see the trampling.

To encapsulate all this, Odell coins the term "manifest dismantling" which for me is an inspiring vision. As a white man and European immigrant in America, the legacy of manifest destiny—as much as I never planned or supported it—is still somehow my legacy. As such I have the most responsibility to disavow it now. And beyond disavowal, the work is to dismantle, which is a rather odd action to practice, when our typical training is for developing, or creating. Can you imagine a "software dismantler"? (There is another chapter I deeply enjoyed in the book about the devaluing of maintenance work.) This is a difficult, if not alien, concept for me grasp and enact, which is part of the reason I think it's a profound conclusion to draw. And while it's not precisely clear how to dismantle the destiny-society as a whole, connecting with the local region more, and choosing to participate less in this attention-economy late-stage of capitalism can certainly be first steps. I look forward to meditating more on how to manifest dismantle more in my life.

P.S. I highly recommend buying Jenny Odell's book. It has facilitated my best, most contemplative thinking of 2019 so far.