The "Personal Statement" for the graduate school application, is the attempt to explain how you will make a difference, not just in your research, but in making the University as a organism more equitable.

Luckily, my proposed research is precisely about  the kinds of social division that that the instructions to this document ask you to address:

Each University wants a different length of personal statement (UC. Berkeley gives no specification, and University of Minnesota asks for a page). So I've drafted my most complete thoughts, and am posting them here before taking the editorial chainsaw to them. Plus I'm including the figure that I made from my transcripts which helped me think about disadvantages.

This last month I attended my first 'ecstatic dance' event. I started to play a game with myself where I identified each unspoken assumption I was making about dancing, and trying to break them. I had to dance in one location, to not repeat a move too often, to stand, to take it seriously, to be energetic, to not have pauses, to synchronise it to the music. It's a fantastic game to play, because the size of the list that you can make is astounding – and it's never exhaustive. Like dancing constraints, the list of prejudices that effects who enters and succeeds higher education is long and never fully enumerated. And as in dance, higher education is shaped by it's biases.

My discovery of the reality of social biases was a turning point in my life. The first time I awoke to my internalised racism a mix of discomfort-amazement overcame me. It was during a protest on the famous steps of Sproul hall. After a few rebel-rousing speeches a black woman came to the stage and started delivering activist poetry. The poem had themes of being a strong, earthy, celestial woman and was sung with jazz-swing. I grew bored and criticised the performance. And then I received a moment of self-awareness wherein I saw that I was dismissing the content because of the delivery. I remember feeling compelled to physically run away from the event, but it was unsuccessful because I was actually trying to run from myself. The entire night I sat in a tearful bewilderedness. I had been brought up to think of myself as not racist, and yet incontrovertibly I had just been racist. It was a painful moment that marked the beginning of when I realised I could have a lot of prejudices I wasn't aware of.

After the illusion of a just world was shattered, my subsequent prejudices came to light more rapidly. My own misogyny became very real upon my reading of favourite academic Joseph Reagle's Free as in Sexist deconstruction of sexism in Open Culture. (Of course it took a man to show me that.) I lost my religious dogma at the holocaust memorials in Berlin and Auschwitz, when I saw that accepting unquestioned messages were dangerous – including the ones from my Jewish family. Data showed me my homophobia when I made a spreadsheet of romantic partners grouped by whether or not I met them travelling, and then tried to explain why I was less straight when touring. Only last month the perusal of a blog of a woman I met at a wedding introduced me to the 'fat stigma' I had been harbouring. The continuous waves of realisation perpetuates my wonder at just how many unidentified stigmas I'm still holding.

The feeling I get from a solid attack on my belief-system is so powerful that chasing after it has become the driving force in my life. No wonder it's precisely what my proposed research agenda is about. The proposal is to make an algorithmic social-bias-detector to run on crowdsourced databases. To think of it in concrete terms, let's consider some observational research I hacked together and posted on my blog in 2013. It meant that I was the first person to see the proportion of female biographies across all Wikipedia languages. They ranged from 8.83% - Slovenian Wikipedia, to 19.97% - Serbian Wikipedia, compare English Wikipedia at 14.21%. There was a sinking feeling to see these paltry numbers, but also one of optimism to have performed a quanfication that can aid the correction of them. Despite how complex that moment was, it definitely informed me to double-down on this line of research. So I've proposed to mine all the properties in Wikipedia (or Freebase etc.), like profession, or properties that aren't even about people, like the age of a concept, and see which fit into our model of what a bias looks like.

Through this detector I am trying to arm underserved academics with data. The aim is to provide a series of inequality indexes like the United Nations Gender Inequality Index. In fact I have already built a prototype, that compares gender, dates of birth, places of birth and ethnicity. This makes the inequality data scene richer because it comes from the the online Open Data landscape compared to opaque surveys. This will be valuable for academics currently researching inequality and make it much easier for other researchers to include inequality as a dimension in their projects. Moreover, the astounding unequal results of the internet's own inequality index will generate lots of mainstream awareness of digital social biases which will lend credence to the access issue.

The second half of my continuing research, the search for unidentified biases, will address the “other individuals” of the “women, racial minorities, and individuals from other groups that have been historically underrepresented in higher education”. First let's smash a binary. To be underrepresented in higher education is not a binary relationship. A person has many facets, and each facts has a different representation in higher education. Sometimes it seems like being underrepresented is reserved only for women and racial minorities; but I think that a big lesson and a nod to the work done by those coming from those backgrounds it to acknowledge a spectrum of underrepresentedness. Therefore as my project attempts to put it's finger on many more social biases I hope everybody will come to see a part of themselves that is underrepresented. That will be very powerful I claim because once all people see themselves on that spectrum of underrepresentedness, it is easier to see the validity challenges of groups like women and racial minorities, since they are not in different class of challenges but rather of a same type of challenge of a different intensity. Essentially viewing yourself as a minority to any degree highlights the importance of good allyship society-wide. 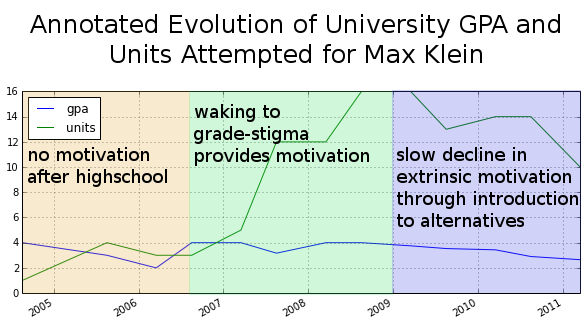 When I insert myself into the spectrum of underreprestentedness the main challenge that comes to the surface is the lack of formal education in my immigrant family. Going over my transcript to submit in this application, the arching narrative it told obviated the difficulties of having no parents that had been to college before me.

At first after high school I didn't go to college at all, I wasn't suggested or pressured to, I was simply left to my own devices. It took some years until the social stigma (here's another one) of having bad grades and low education frustrated me and so I began junior college with a man-on-fire attitude. Bolstered by the successful waypoint of transferring the educational passion continued. Yet towards the end of my college career, I felt wasn't working towards a goal anymore as I had been, and my motivation slipped into a depression. This was the challenge because my family could not advise me on why to sprint to the end of that degree. I overcame that challenge by redirecting my energy in to real-world endeavours, which is when my Wikipedia volunteerism first blossomed – and serves as the basis for my research today. Even more, I've learned from that mistake by preplanning for the next depressive phase in graduate study when I inevitably encounter it, so instead of deflection I can greet the uncharted feelings with more reaching out, both to advisors and my past self.

I recall at that time of difficulty for me how my friends could phone their degree-holding family members, and received a boost over the shakey potholes so that they never amassed into a derelict street and their vehicle never totally fell apart. It's really a class difference, when you imagine the family as an organism – like how an idea is an organism in memetics. It's easier for the family to repeat behaviour rather than create new pathways. Having this handhold of minority-ness in education I believe has allowed me to see a galaxy of discrimination, and become a leader in changing them.

It has actually been in educational access that I've been a leader in change. After avenging the stigmatic education perceptions with my college degree, I had all desire to keep on learning, and none to impress anyone. In the winter after college I founded Sudo Room “hackerspace and creative community” along with 23 others. There we taught and learned mathematics and technology completely free of institutions for no money, as a non-profit, and for no ulterior motive. It was precisely because it was free as in speech and beer that we had community members, in including children and their school teachers, many of them people of colour, turning up for our “Today We Learned” sessions.

It was at Sudo Room I encountered radical activists that turned me on to start practicing my allyship seriously. I lapped up all the geek-feminism wiki anyone could link me to. I donated to, and took as much training as Ada Initiative would allow a cis male to participate in. Now I refuse be on all male panels, and admonish sexist remarks online and in person with best practices. I know there's no special reward for doing the minimum things to not be sexist – that was a further humbling realization. The unconfortable epiphany cemented my dedication to this sort of DIY social uplift, and meant my being treasurer, the one person backstopping financially responsibility for a not-yet 501c3 nonprofit. I'm so serious about making an equitable society I laid down my own bankruptcy.

For all its merits, two years pursuing career hackerdom, I feel like I've hit a wall which I want graduate study address. I believe that in principle in today's connected world one can fulfil their career without an institution – that would be a path where those coming from less educated backgrounds could flourish. But that is the exception, the theory breaks down with factors like closed access papers, and being propelled by serious, high quality collaborators. So as much as I might disagree with the concept in the abstract – because of it's bias against women and racial minorities, etc. - I do want and need some thing from the institution. This reluctant acceptance is what has caused me to focus my interest in computational social science research directly on unequal representation on the web and by proxy in institutions. There is no need for me to translate my work and history into how it will aid representation in institution because my very work and history is about unequal representation in institutions.