The best part of soup is that soup doesn't have parts.

This is a piece I wrote for Bulbes, a zine about soup.

The concept of  "smooth" versus "striated" spaces  (striated means lined or striped) by Deleuze and Guattari, is a stream of philosophy with a missing interpretation through soup.
Depending on your choice of violent conflict, the smooth/striated dichotomy has popularly been depicted in the film "Die Hard" and the 2002 Israeli Operation in Nablus. In those scenarios parties moved not through the striated spaces of elevators, stairs, streets and squares, but through smooth and direct routes like air ducts and holes cut in walls.
I prefer a more pastoral example to grasp the notion of seeing a smooth space under a striated one. Northern Californian valleys are, by default, quite literally a smooth space with rolling hills. A striated framework is imposed on top of them in the from of designated walking paths. This New Year's Day I was hiking there with some friends when our crew realized that the right side of the bifurcated path we took was a dead-end about 10 metres in. Some walked backwards along the right path to the junction point to continue down the left path, but my girlfriend Adi walked across the imaginary hypotenuse directly thereby stepping off any of the paths. That is seeing the smooth under the striated.

Soups are the ultimate smooth in the foodspace. You can eat any part of the soup, at any time, by gracefully carving through the three-dimensional liquid with your spoon. The same cannot be said for a pie, sweet or savoury, as it has an inside and an outside, and a top and a bottom layer. Because of this you must eat its parts in an order, and that order may come with a value judgement. Likewise a burrito in foil is not smooth, it is a striated space of one stripe - you are supposed to eat it front to back in linear order. Even a combination of potatoes and peas on a plate must cross the threshhold of your lips in some discrete relative positional arrangement. That is not true for the soup group; a hummus, a miso, or a lentil stew. You can eat those in any order - or rather there's no order speak of. There being no order frees us from their being judgement of how we eat and eschews a level of social etiquette.

Perhaps one of the great social orders and hierarchies that exist, at least in the Western world today, is the in relationship space. The way I have been taught to view relationships in my life, largely donated by the patriarchy, is striated. Here is a map of the mental conception of the pathways of relationships for me. I wonder how true it is for you? 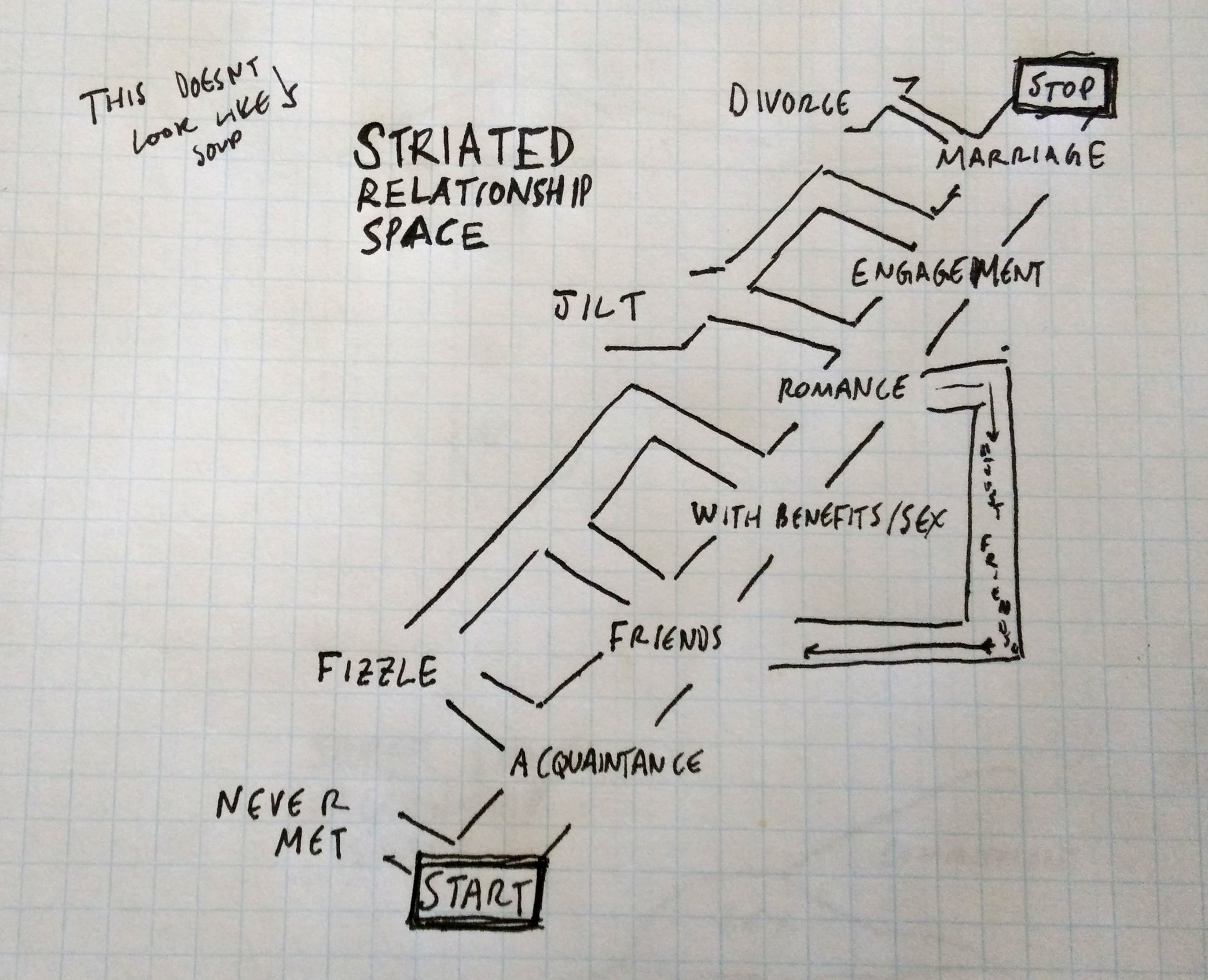 It does not look like a soup. It is much more like a high road or a main drag, with a few side alleys you might find yourself unlucky enough to fall into. Relationships, says the striated-theory, are places to go with junctions and turns to take.

But that's just one way to view it. In fact, in a conversation I was having with another partner last year, we decided to start having less sex. Quite easily we could slip into viewing this as that we were "Friends with Benefits" or "non-exclusive partners" now moving into the "Friend zone". Let's resist the temptation to impose striation. Let's think about it as soup. The relationship space is more greatly simplified when soupified in smooth-theory. 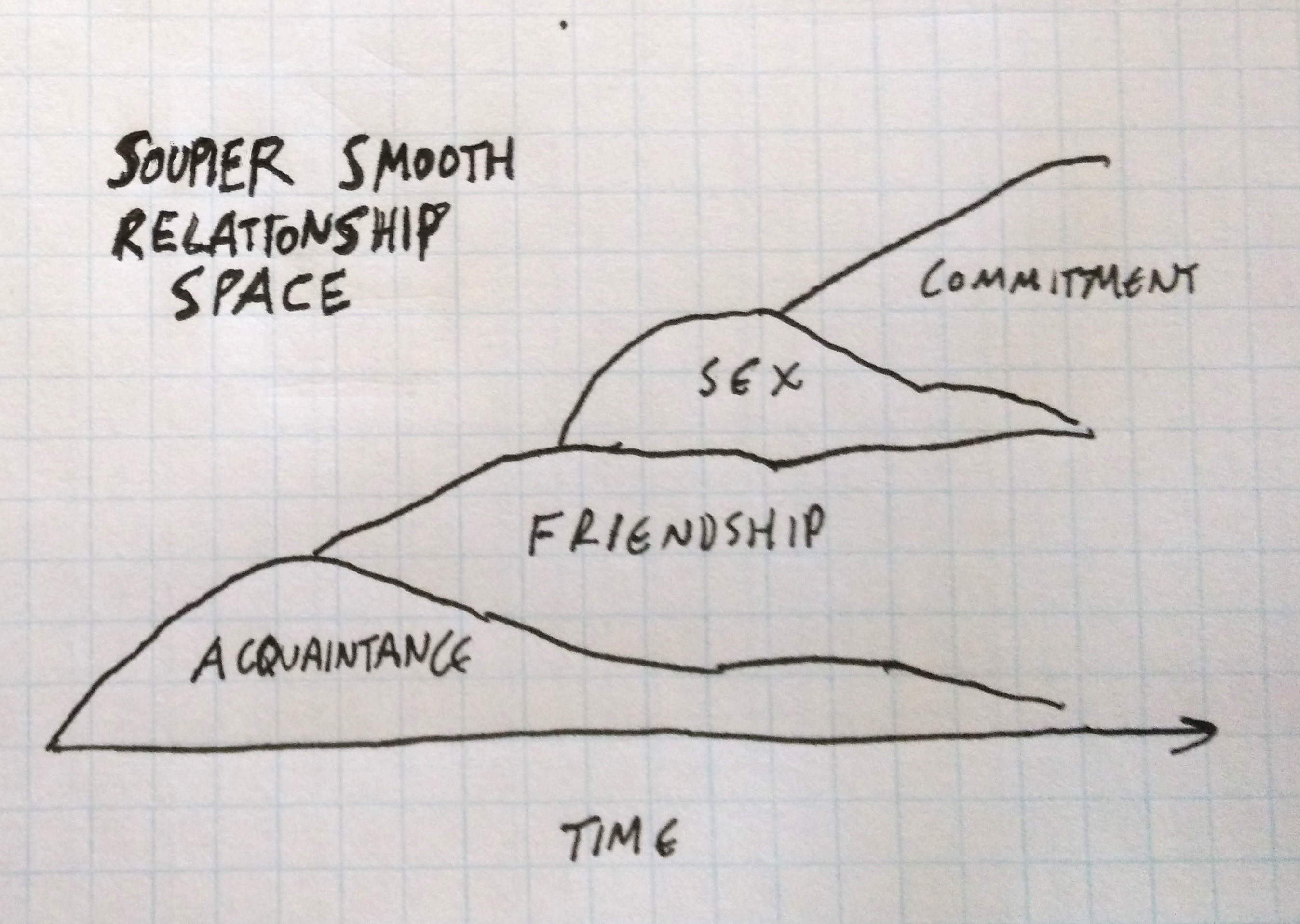 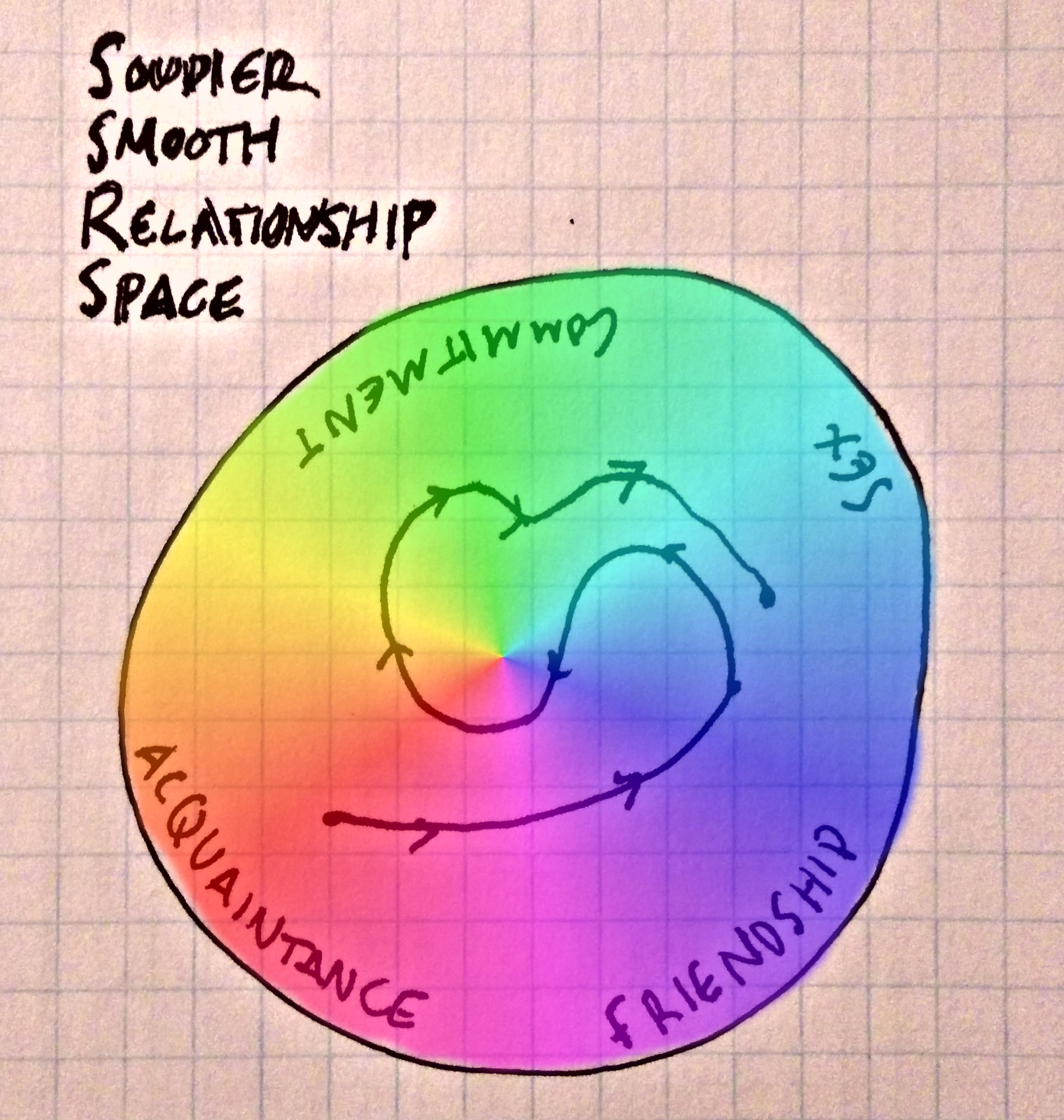 Updated: A second way to think about a soupier model without an explicit time axis, although the a curve is drawn inside the space to demonstrate how a relationship might evolve over time.

(Notes: the image I have drawn here is not accurate for the relationship I described in the last paragraph. Additonally if anyone wants to take a stab at redrawing the smooth relationship space without a time axis I would be glad to post alternate imaginings).

In the relationships-as-soup-iverse, that conversation can be viewed as a modification of the composition of soup. The soup still exists, it might taste different, it might be more or less substantive, but it is still soup. Transferring the notion that soup has no order and carries no judgement, likewise the relationship is never eaten, or slurped wrongly. You cannot break etiquette or convention by having traversed the relationship roads poorly.

When I found this viewpoint I was relieved because I was having fears about whether I'd broken her expectations, or upsetted the social order between our mutual friends. When I switched from viewing relationships as a striation of discrete statuses, to a smooth soup of two people, I was liberated in a small way. Liberated because the framework had no room for our mutually-agreed feelings to be against-the-grain.

Perhaps relationships, like soups, don't have distinguishable parts that can be assembled in the wrong order. Let your soup act as a tiny reminder to the see the smooth under the striated.